Greek Salad is one of my favorite things in the whole wide world. I love it filled with chopped vegetables, some sort of topping, and usually skip the romaine. The kids love it, too, but I always saw dishes in the sink with raw onions framing the empty plates. In salads all over Latin America, onions are soaked in vinegar to cut their sharpness. I started tweaking my notes. The plates in the sink are totally naked now.

Below, I’ll give all my variations, starting with my seasoning blend, a raw or grilled salad base, then 5 toppers to pick from. Two are vegetarian, two are for carnivores, and one for pescatarians.

If you love it, please come and find me again! :D

Pick a salad base!

3 Tablespoons red wine vinegar
½ red onion, thinly sliced from pole to pole, end to end, whatever you’d like to call it
Combine in a small bowl, and let rest while you prep the rest of the salad.

You should still have about 2 Tablespoons of red wine vinegar left. If not, add enough to equal 2 Tablespoons.
1 Tablespoon Jen’s Greek Seasoning or Penzey’s
½ teaspoon sugar
Sprinkle into the vinegar and give a good whisk.
¼ cup extra virgin olive oil
Slowly pour in while whisking. Toss with the salad. Divide between 4 plates.

4 ounces Feta, broken into nice chunks with your knife point, or cubed if you prefer tidier
Accessorize those salads.

Go fire up your grill. Mine’s charcoal and wood, a medium fire. If you’re rocking propane, high is nice.

1 English cucumber, seeded (a grapefruit knife is lovely for this), and sliced on the diagonal
½ bunch flat leaf Parsley, leaves only, roughly chopped
½ cup Kalamata olives, halved if you like
¼ cup pepperoncini peppers, sliced, optional
Add to the grilled veggie bowl. Toss, and divide between plates.

4 ounces Feta, broken into nice chunks with your knife point, or cubed if you prefer tidier
Accessorize those salads.

1 ½ pounds shrimp, peeled and deveined. I prefer the tails on, but you do you.
3 Tablespoons olive oil
1 ½ Tablespoons Jen’s Greek Seasoning or Penzeys
Toss and let marinate for 2 hours.
1-2 lemons, 1 wedged if using the stove, 2 halved if grilling

Stovetop – Heat a large cast-iron or nonstick skillet over medium heat. When the skillet’s nice and hot, add the shrimp in one layer. Cook until they are just opaque, about 2-3 minutes per side. Pile into the center of the plates. Garnish with lemon wedges.

Grill – Preheat the grill over high. Skewer the shrimp pretty tightly together and halve the lemons. Place the lemons on first, cut side down, then the shrimp, on the grill. Grill the shrimp until they are just opaque, about 2-3 minutes per side. Pile into the center of the plates. Garnish each plate with a lemon half. 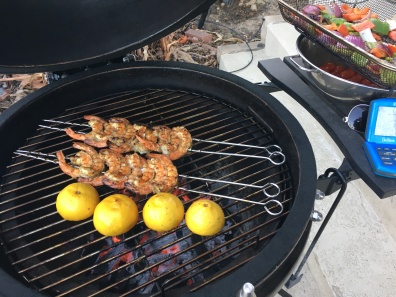 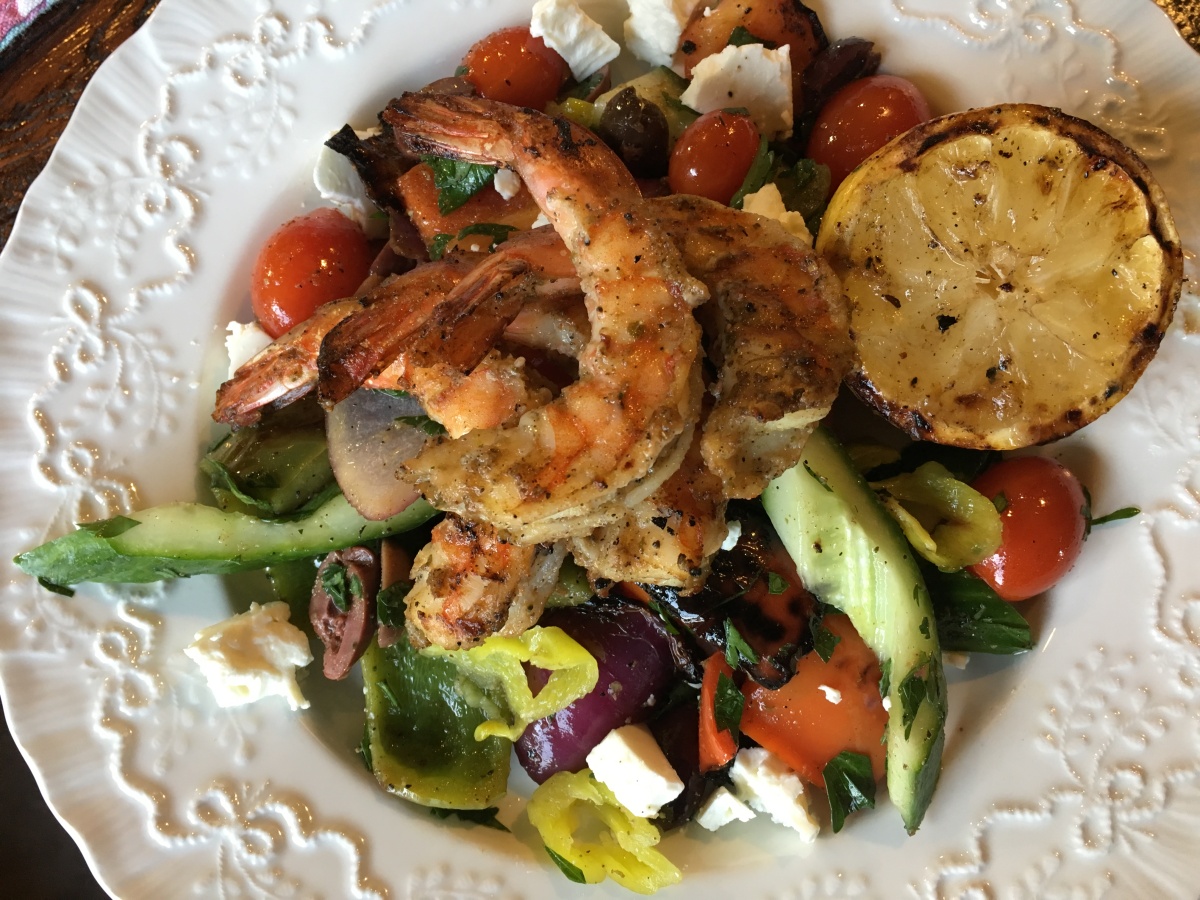 ½ onion
Grate, then wring out in a tea towel to get rid of the moisture. Put in a medium bowl.
1 pound ground lamb
1 Tablespoon Jen’s Greek Seasoning or Penzeys
Add to the bowl and combine. Press into logs around 4 skewers. Refrigerate for at least 2 hours. I like to do this in the morning, so they’re waiting for me at dinnertime.
2 Tablespoons olive oil
2 lemons, halved
Grill – Preheat the grill over high. Brush the lamb with olive oil. Place lemons, cut side down, on the grill. And place the lamb skewers on the grill. I love a grill mat for these just because they’re on the delicate side. Grill for about 10-12 minutes, until no longer pink inside, turning the skewers frequently. Lay a skewer on top of each salad. Garnish each plate with a lemon half. 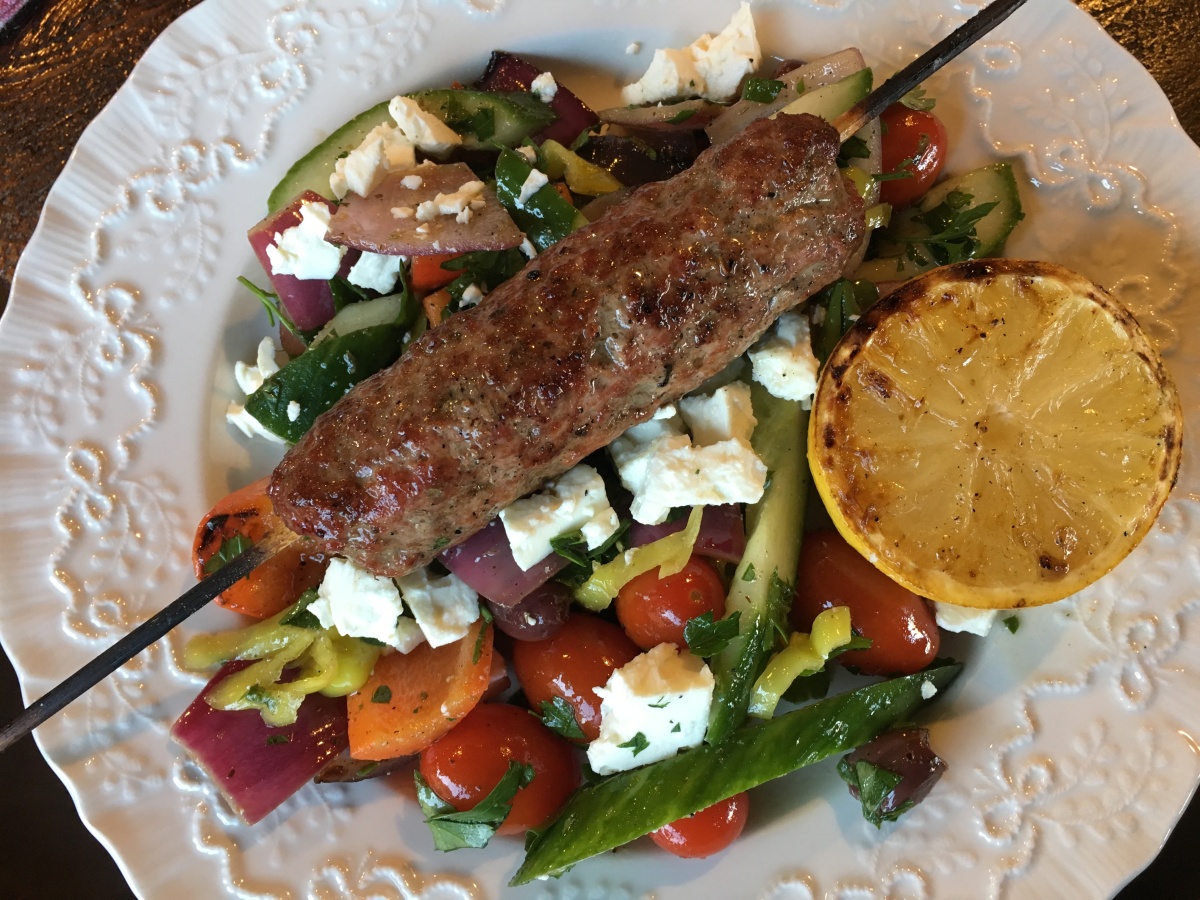 2 cups Greek yogurt. Okay, look at the nutrition label. I know. <Snooze> I’m sorry. You just have to check out the protein. About 20 grams per cup is the stuff with the amazing creamy consistency. Get that stuff!
1 English cucumber (or 2 little cukes, peeled), seeded, grated, and squeezed in a tea towel to get rid of all that excess moisture
3 garlic cloves, pressed or smashed and minced – We’re garlic heads. Reduce this to 1 or 2 if you’re not!
¼ cup fresh dill, chopped pretty finely
1 teaspoon Diamond Crystal kosher salt
¼ teaspoon black pepper
¼ cup fresh lemon juice
1 Tablespoon olive oil
Combine in a bowl. Cover with plastic wrap and refrigerate for at least an hour. You can make this the day before. 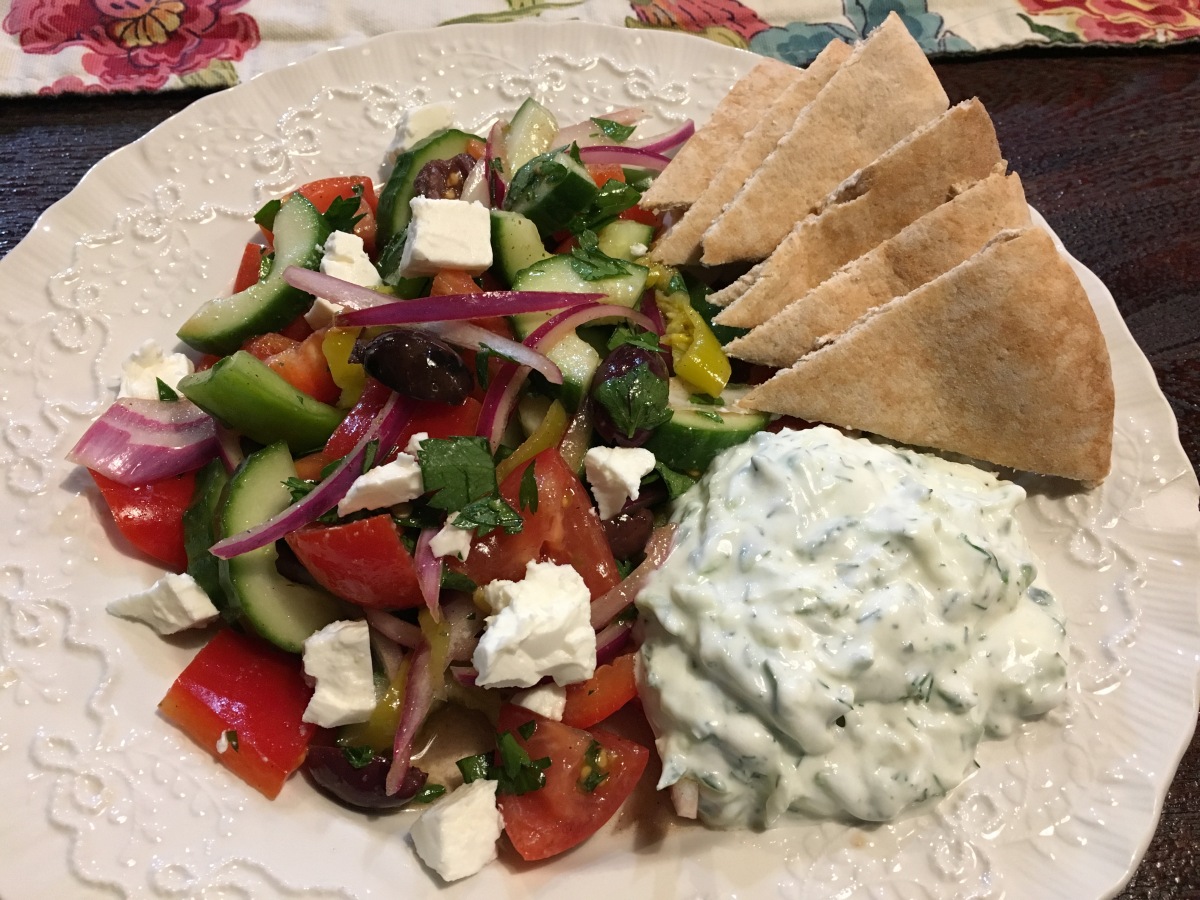 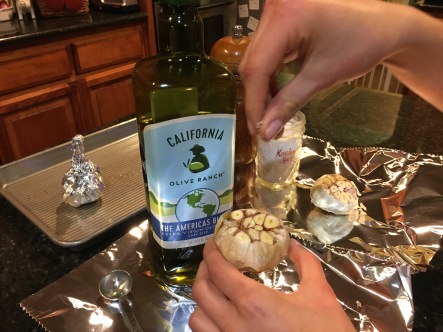 (Need to soak the beans the day before!) Buy a premade hummus if you must… I love to add one whole head of roasted garlic to the hummus recipe from Christopher Kimball’s Milk Street: The New Home Cooking

. I have that recipe posted here.
Roasting garlic is easy peasy. Might as well do a few since you’re firing up the oven. 🙂 Just squeeze the extras into a glass jar and put it in the fridge to make soup, potatoes, mac and cheese, meatloaf, etc super happy later this week.
Preheat the oven to 400°F or 205°C, depending on what side of the pond you’re on.
1 head garlic
1 teaspoon olive oil
Salt
Pepper
Cut off about the top half inch of the head to expose the cloves. Rub the exposed garlic with a teaspoon of olive oil. Sprinkle with a little salt and pepper. Place on a square of aluminum foil. Gather the foil over the garlic to cover it, and give it a tight twist above the top of the garlic head. Move to a little baking sheet. Stop there, or make a little vampire-fighting army of roasted garlic if you’d like! Roast til nice and soft, about 45 minutes. Cool til you can handle it, press the garlic near the base, and squeeze out those little cloves of heavenly deliciousness into the food processor you’re making the hummus in. Mmmmm. Garlic yummus!

1 pound chicken breasts, cut into 1 ½ inch cubes if grilling, left whole and pounded to about 1/2” thick if cooking on the stove
2 Tablespoons olive oil
1 Tablespoon Jen’s Greek Seasoning or Penzeys
Toss and let marinate for 2 hours.
1-2 lemons, wedged if using the stove, halved if grilling

Stove – Heat a large cast-iron or nonstick skillet over medium heat. Generously sprinkle both sides of the chicken with salt and pepper. When the skillet’s nice and hot, add the olive oil, swirl it around, and add the chicken in one layer. Cook, flipping once, until an internal thermometer registers 165°F or until all the pink is gone from the center. Slice it up and add to the center of those plates. Garnish with lemon wedges.

Grill – Preheat the grill over high. Grill until they cooked through, about 10 minutes with the lemons cut side down. Pile into the center of the plates. Garnish each plate with a lemon half. 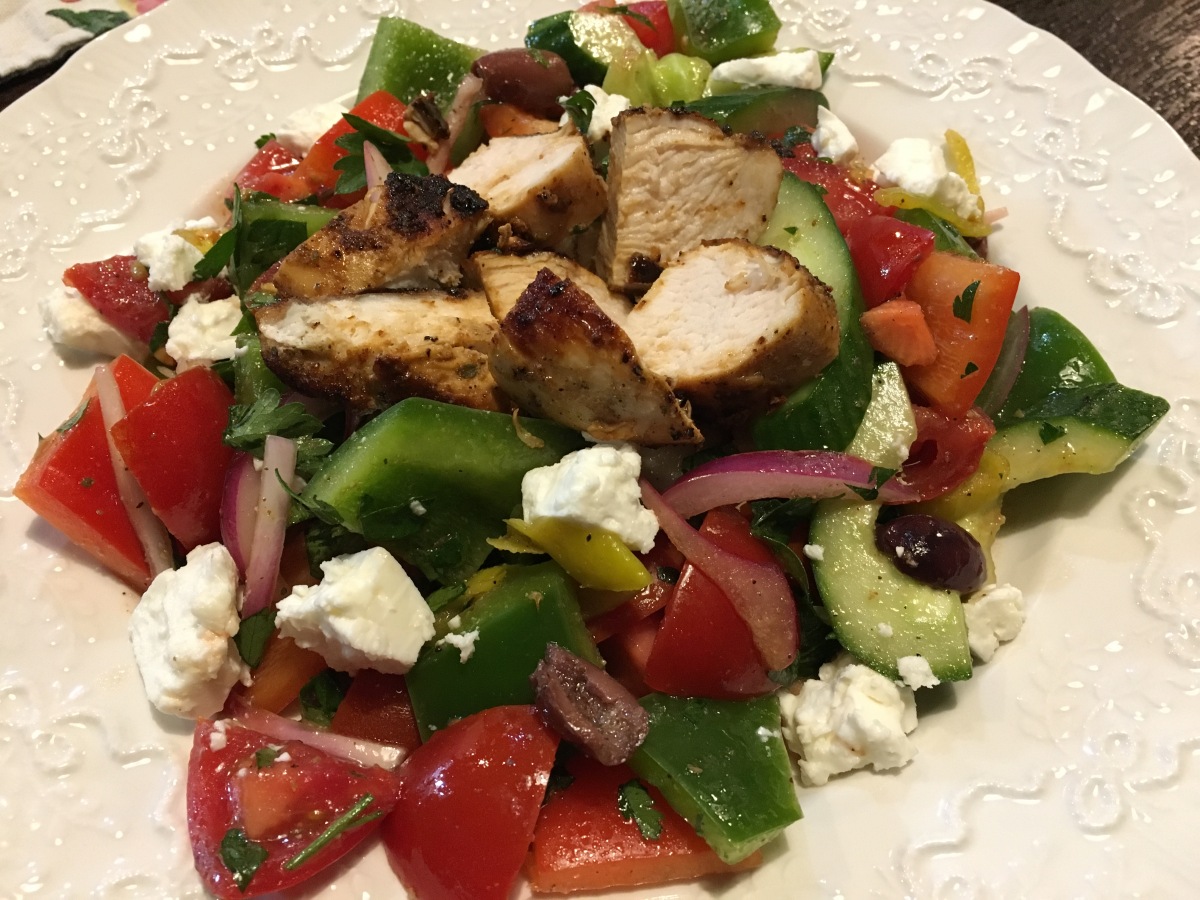 Some of my favorite Greek cookbooks….

How to Roast a Lamb: New Greek Classic Cooking

by Michael Psilakis. Total foodie book. He has a recipe for gyros that’ll knock your socks off. It’s a process and a commitment, but if you love kitchen adventures, it’s very worth checking out.

by Michael Psilakis. This is his much easier, healthy book. There are 7 base recipes at the front that get used throughout.