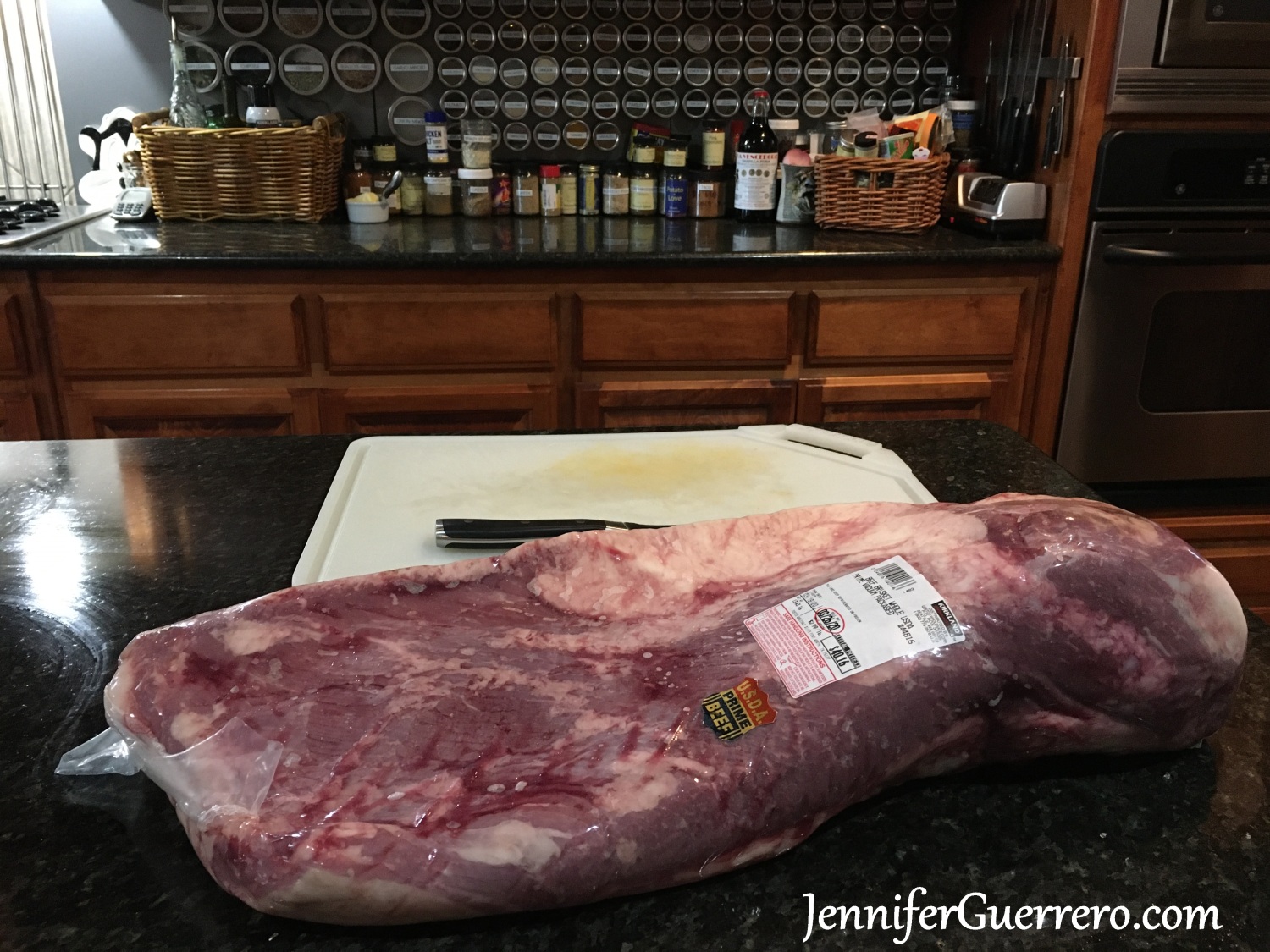 I’m noticing that the easy cuts of meat like burgers and chicken are sold out during the quarantine. But some of the very yummiest are still there! I needed a brisket flat to make a Jewish braised brisket, but only whole packer briskets are available. I thought I’d do a photo sequence of how to break a brisket down, bbq style into point and flat, in case that might help somebody. Nothing is wasted. And this is enough meat to feed you for days.
Pic1 – Whole prime packer brisket in package. 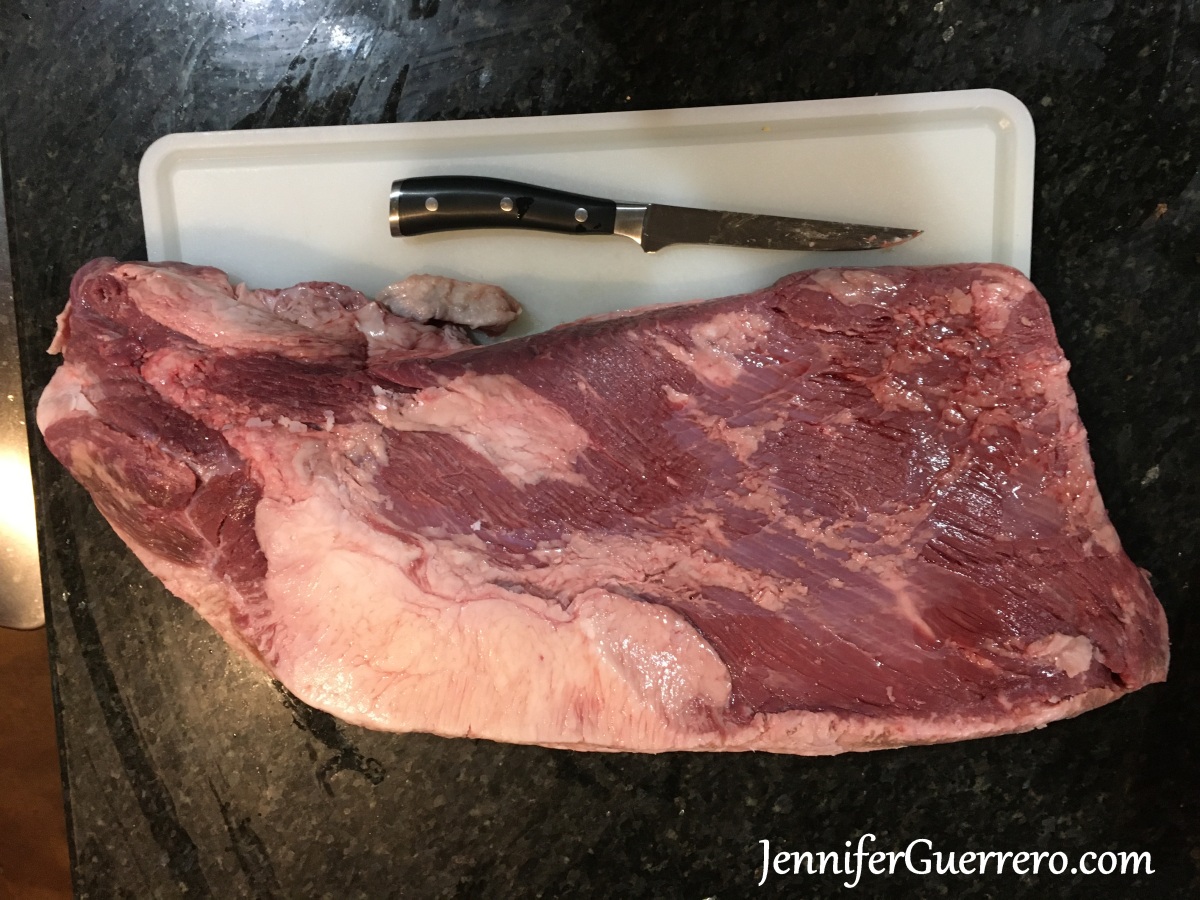 3 – I trim a strip off both sides to tidy it up, and allow you to see where your knife wants to be. (Save all the meat and fat trimmings. We’ll talk about those later.) If you’re bbqing this whole, trim a little off the flat end (rounding his corners a bit) if it’s too thin, so no one gets a dry bite. 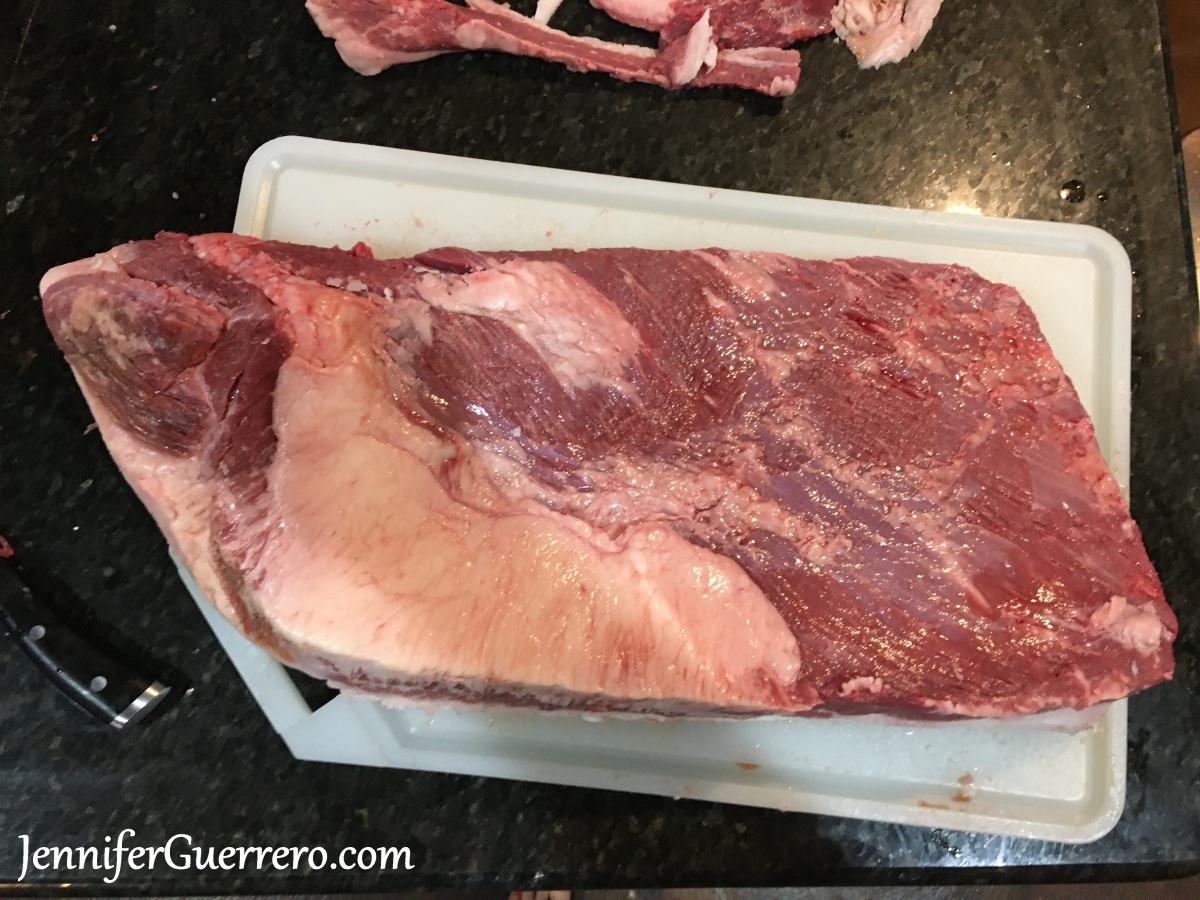 4 – Now you can see the fat stripe diagonally separating the flat (top right in pic) and point (bottom left in pic). Think of the point like a beautifully marbled ribeye section. The flat is really lean.

5 – Top of the brisket. You want to trim that fat cap to 1/8” to 1/4” thick. A good indicator of what’s right for your family is how much fat they like on a steak. Don’t go under 1/8”, though, because the fat naturally bastes the meat, keeping it succulent and juicy, and has more beefy flavor than the meat itself. 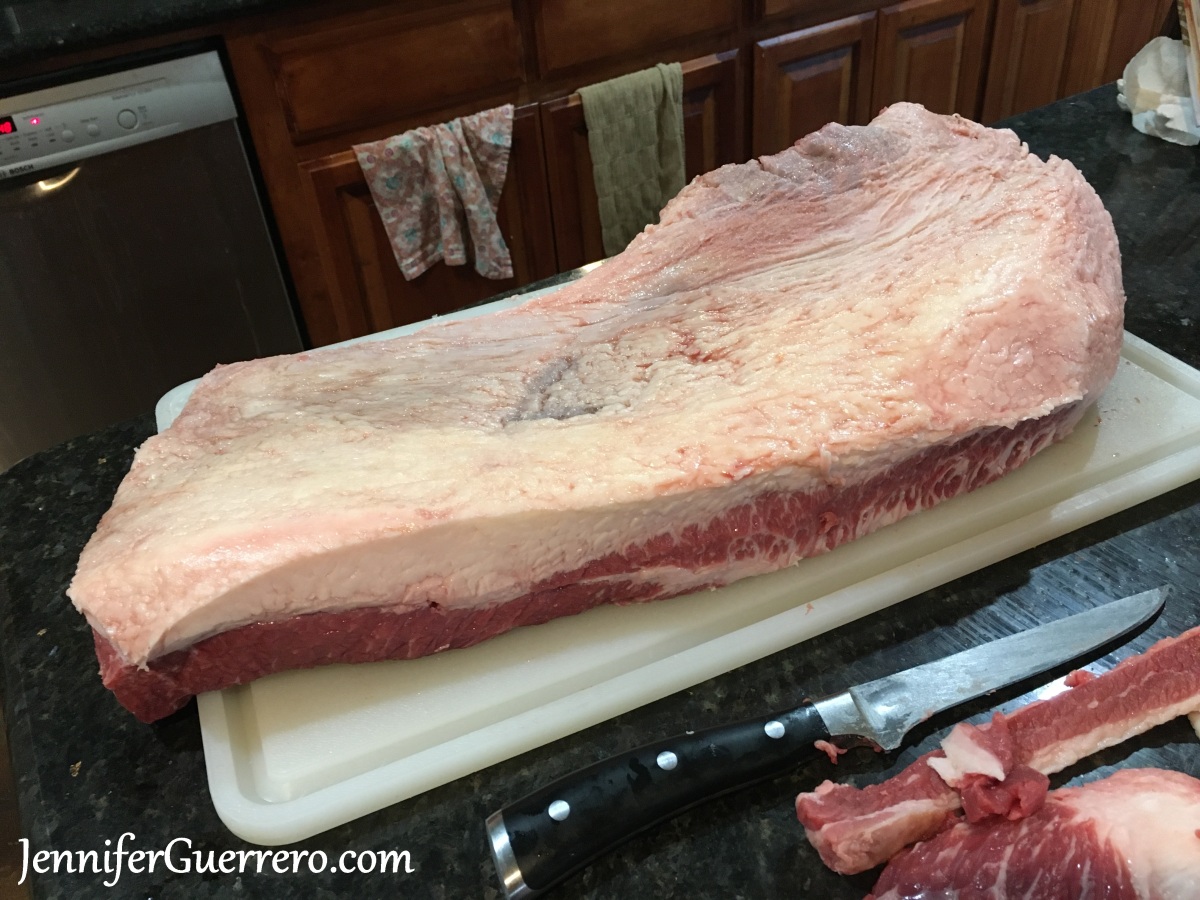 6 – Trimmed brisket. If you made any holes in the fat cap where the meat is exposed – no big deal – make a fat graft to seal him back up.

Here’s the recipe for my Smoked BBQ Brisket.

7 – Peeking at the separation line you’re aiming for. Point’s on the top right and flat’s on the lower left.

8-9 Patiently use your boning knife to make little shallow cuts to separate them, peeling it back as you go.

This is my boning knife.

It’s a Wusthof classic ikon boning knife. I chose it because it’s full tang, meaning that the blade runs all the way through the handle so that the blade and handle can’t separate from each other. And it has a curved handle, making it super comfortable to work with. The blades of boning knives are a bit flexible. Is it necessary? No, it’s one of my favorite knives, but I’ve broken down meat with a chef’s knife, a santoku knife, and a paring knife before. Just be a little more patient and stick with the knife tip!

10 – Fat. This will go in the oven while you braise or in the smoker for about 5 hours while you smoke to render. Strain the glorious liquid fat into a mason jar. When it cools, cover and refrigerate. You can use this anywhere you’d use butter or olive oil in a savory way. Hug me later!

14-15 – Point slathered in my rub, ready to be vacuum sealed and smoked into a glorious dish called burnt ends next week.

Flat smothered in mustard, salt and pepper to make a Jewish braised brisket tomorrow, and eat the next day. This is out of a book I just received for review called

Eat Something: A Wise Sons Cookbook for Jews Who Like Food and Food Lovers Who Like Jews 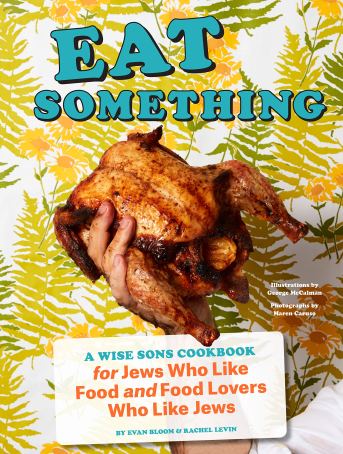 I’ll get a note out to the publisher requesting permission to share that recipe, so I’m leaving a spot for that link here. The book is delicious and frequently hilarious, and there’s a roast chicken in there that might be even better than the brisket. I know!

Fat to be rendered.

Trimmings for the freezer. Grind into the best ground beef, or make this chili in your instant pot once you have 3 pounds worth. 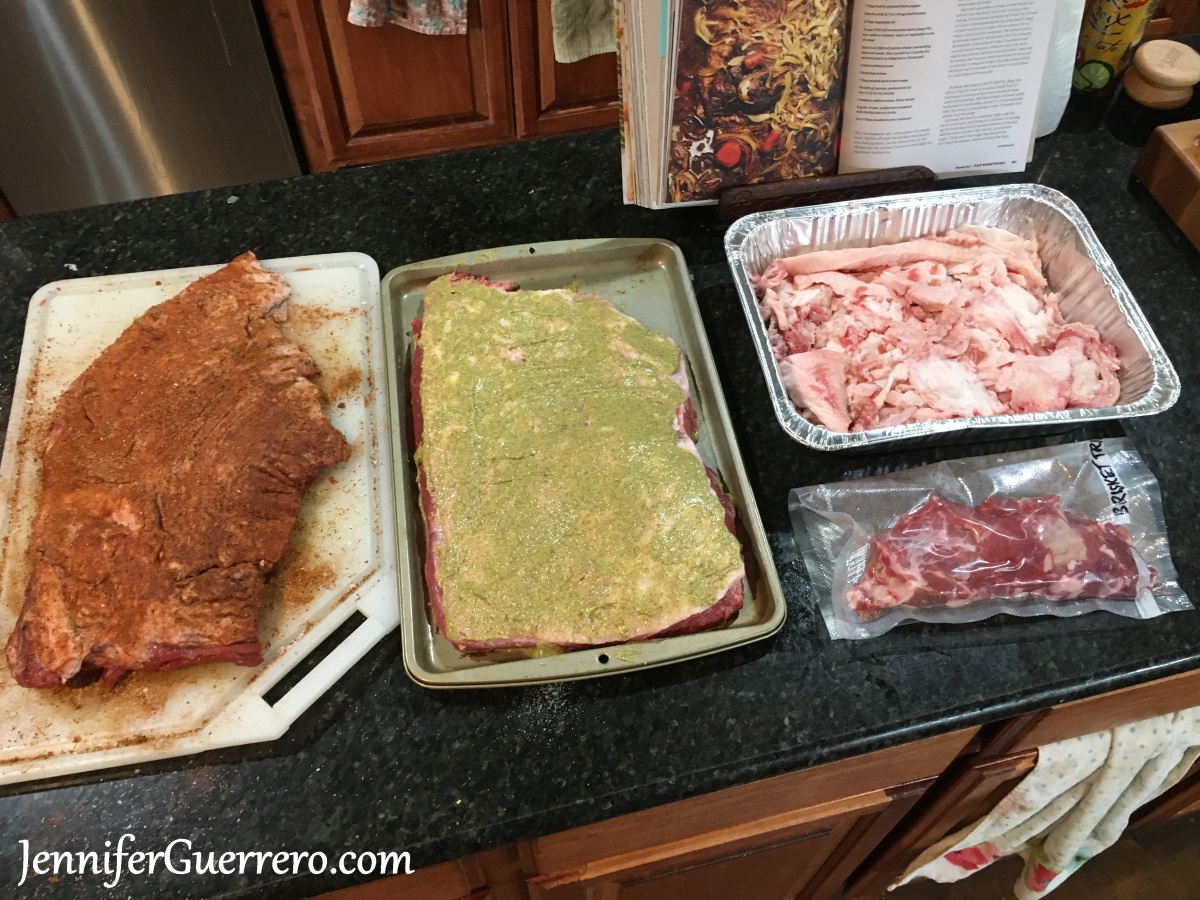 16 – That rendered brisket fat. All the yes!

I’m an Amazon affiliate. Any time you use one of my links to get to Amazon to make a purchase, Amazon gives me a tiny percentage. Thank you!