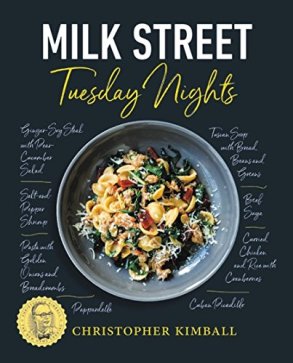 Oh, I just love what they’re up to over at Milk Street! Milk Street Tuesday Nights is filled with global recipes, but made totally doable for a week night. It’s a very relaxing book to work with. I frequently scale up the seasoning when I cook, and find that I just don’t need to with this book. There’s not an apologetically seasoned bite to be found. Our taste buds were really happy with everything. Well, I still scaled up the garlic a little, but not nearly as much as I usually do. Great stuff!

If you haven’t seen the show yet, it’s a really neat one. They have a lot of my (and probably yours if you’re reading this) culinary heroes on as guests, so you get a lot of points of view, and flavor injections coming to the party.

END_OF_DOCUMENT_TOKEN_TO_BE_REPLACED

Well, my husband and I were having a better run than usual, and they handed me a whiskey shot and I tipped it back just like I would those cups of water they hand you while you’re making your way. While running. I know! I coughed hard, and runners around me were cracking up, because they were thoughtful enough to stop and sip. Show offs! 😉 Just kidding. A lady from TX Whiskey held up a cup and said, “Drink this.” I laughed and coughed out a, “No!” with my hand outstretched in the halt position. She said, “No. Really. Trust me. It’s a nice chaser.” I took a sip. It was absolutely lovely. Smooth, a little sweet, and super refreshing. It hit the spot. I was craving that later on a nice hot day, and contacted them. You may be wondering – Oktoberfest? Hot day? Oktoberfest happens in September and it’s still totally hot in Texas. It’s summer food and drink weather *mostly* from April til October. You know, with the occasional winter coat and hail…. The cocktail’s called Big Rosie, and it’s the perfect summery sunshine drink. Killer with barbecue. And it’s silly easy to make. A big thanks to Firestone & Robertson Distilling Co. for letting me share it with you. END_OF_DOCUMENT_TOKEN_TO_BE_REPLACED

It’s starting to cool down a bit outside. Fall is the perfect smoking weather.  The Complete Electric Smoker Cookbook

is great for when you’d rather be out throwing a frisbee or bonding with your lawn chair in the sunshine than playing in the kitchen. It’s an easy, yummy book that will get you out in that yard. It’s called an electric smoker cookbook, but the recipes work perfectly in my kamado-style grill with a heat deflector plate, too. Any tweaks I made to the recipes are noted in the review below. END_OF_DOCUMENT_TOKEN_TO_BE_REPLACED